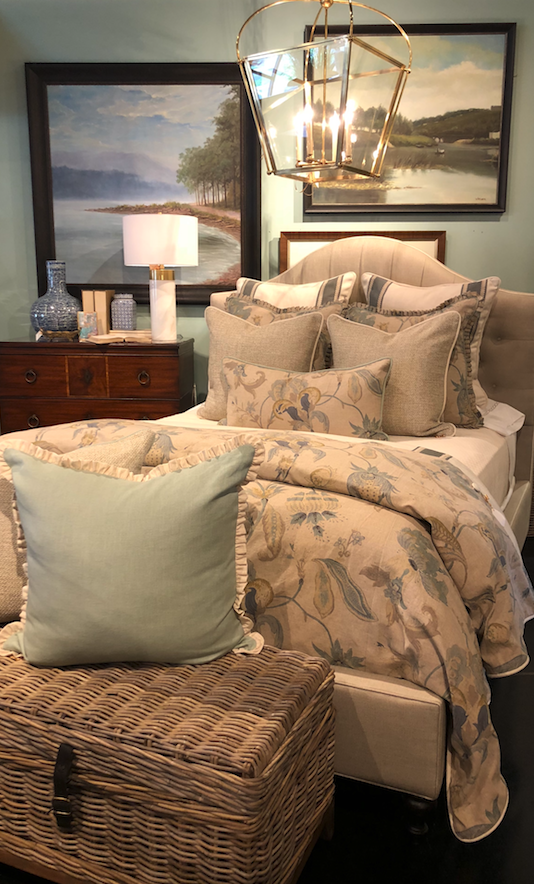 Sisters Kathy and Paula have spent their lives working as a team. As little girls, they shared a bedroom, and always got along like two angels. They never fought. Never ever wore each other’s clothing (without permission, stretching it out). They never tugged a little too hard when asked by Mom to do the other’s hair. Wink, wink.

Now, these almost-twins get along famously. (Except, that Paula is always eager to point out that Kathy is the older of the two, and Kathy is quick to retort that at least she’s the natural red head.) At Nell Hill’s, they have joined forces to design bedding ensembles for our inspiration beds and for customers. Today, I asked this Sister Act to show us exactly how they make the beds at Nell Hill’s so darn inviting. 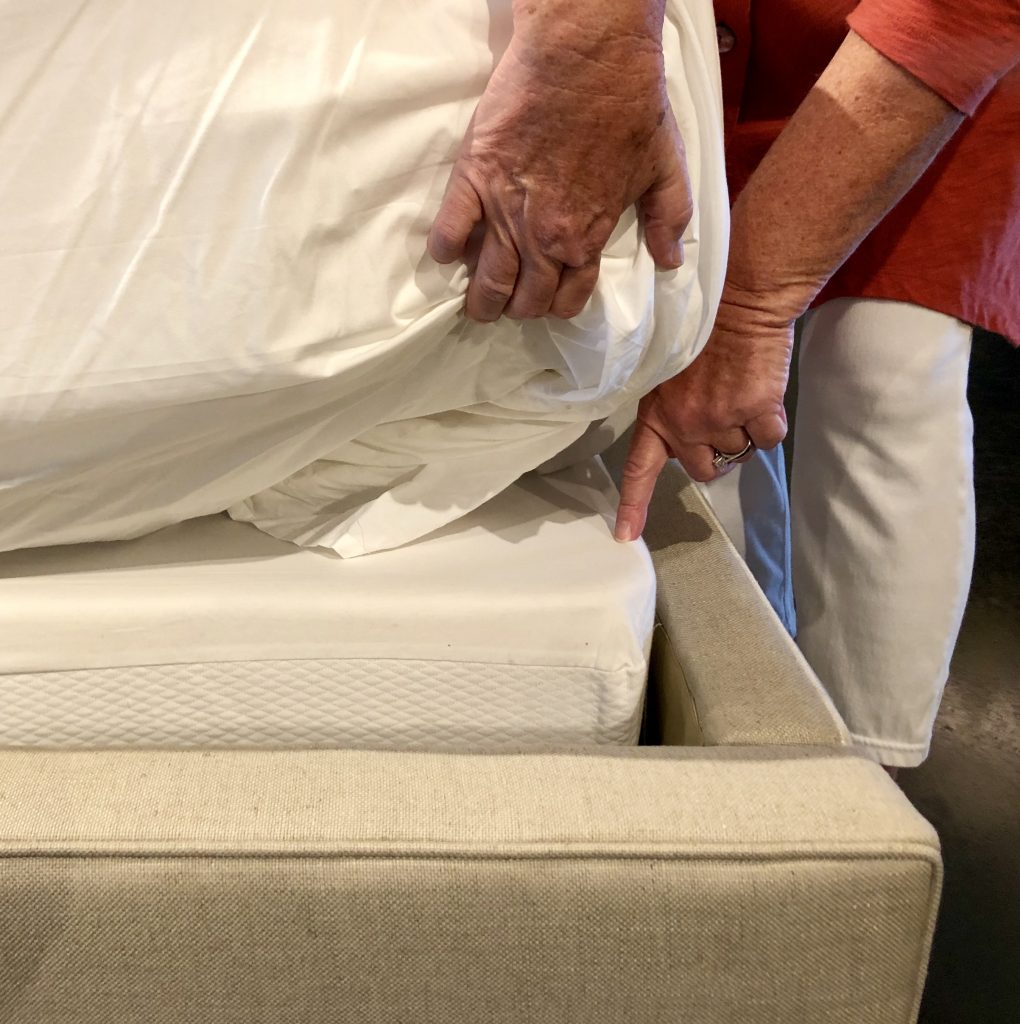 If your bed frame has attractive sides, you don’t need to cover them up with a dust ruffle. But you do need to cover up the exposed boxed springs. We sell a few styles of boxed spring covers to add a dash of texture. But you can also use a fitted sheet. 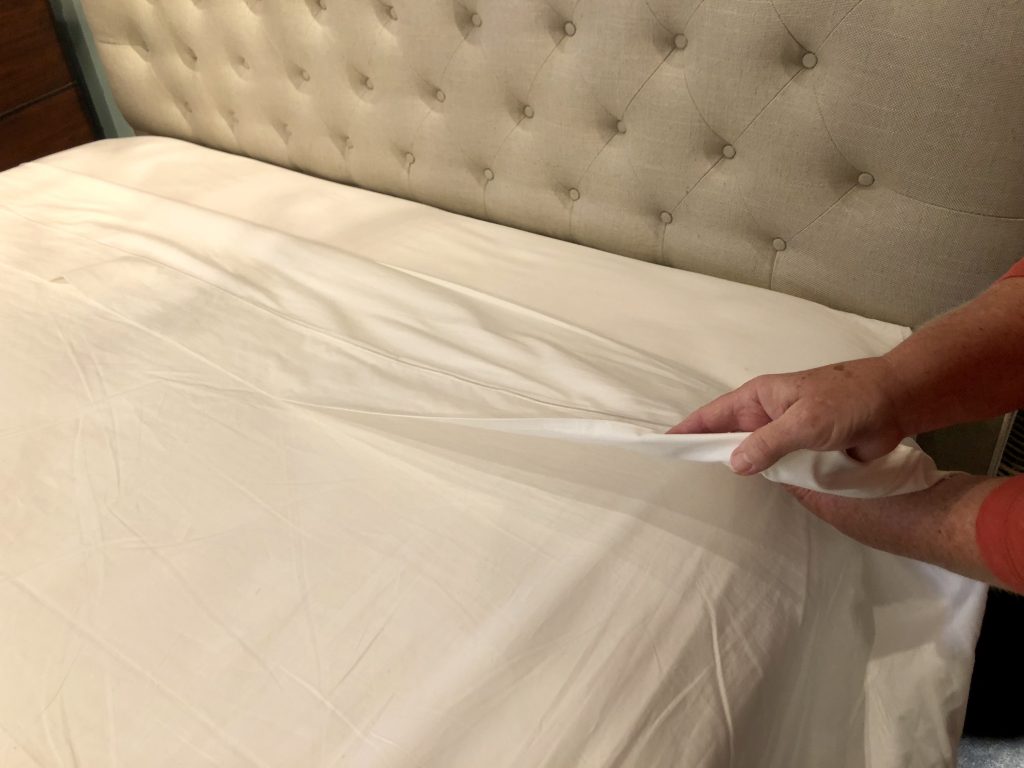 Fold down the top sheet.

We’re wild about sheets with a pretty finish. To show off the lace or embroidery detailing, we put the top sheet on the bed right-side down, then fold it back over the coverlet. Right now at Nell Hill’s, we are selling beautiful pillowcase sets and sheets that have embroidered or lace edges, which take bedding to the next level. 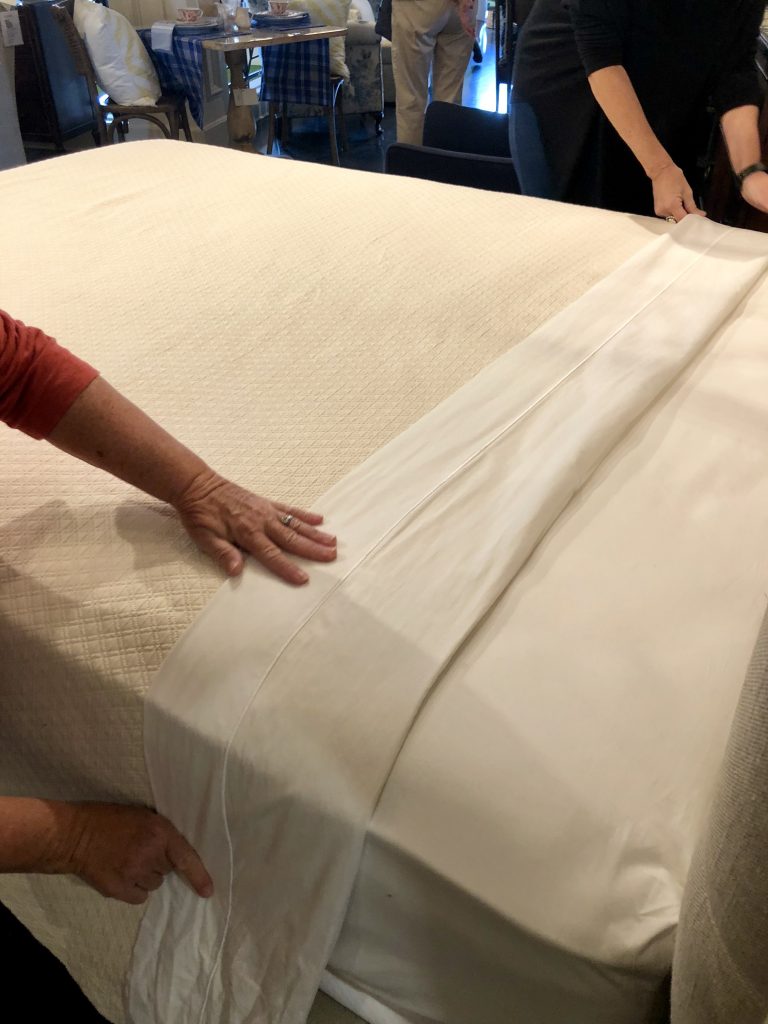 We like to add a light coverlet to our beds because they are nice to sleep under when you’re not yet ready to dive under a warm duvet. They add some delicate detailing, like a trellis pattern or diamonds. And the best part, the more you launder them, the softer and cuddlier they become. On this inspiration bed, we tucked the coverlet in to create a clean finished look. 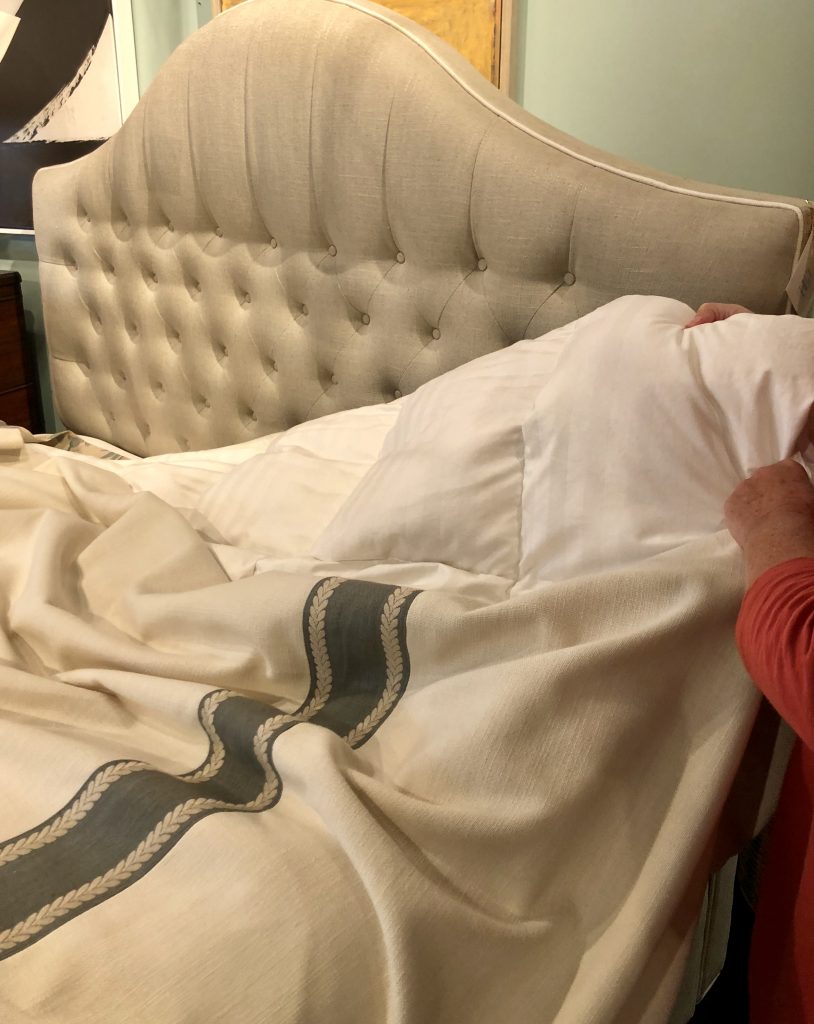 Getting the fill neatly inside the duvet cover is not as easy as it seems. It can be hard to get the fill into all the corners and get it to lay cleanly. Kathy and Paula have figured out a fool-proof system, which works best if you have two people, one on each side of the bed. 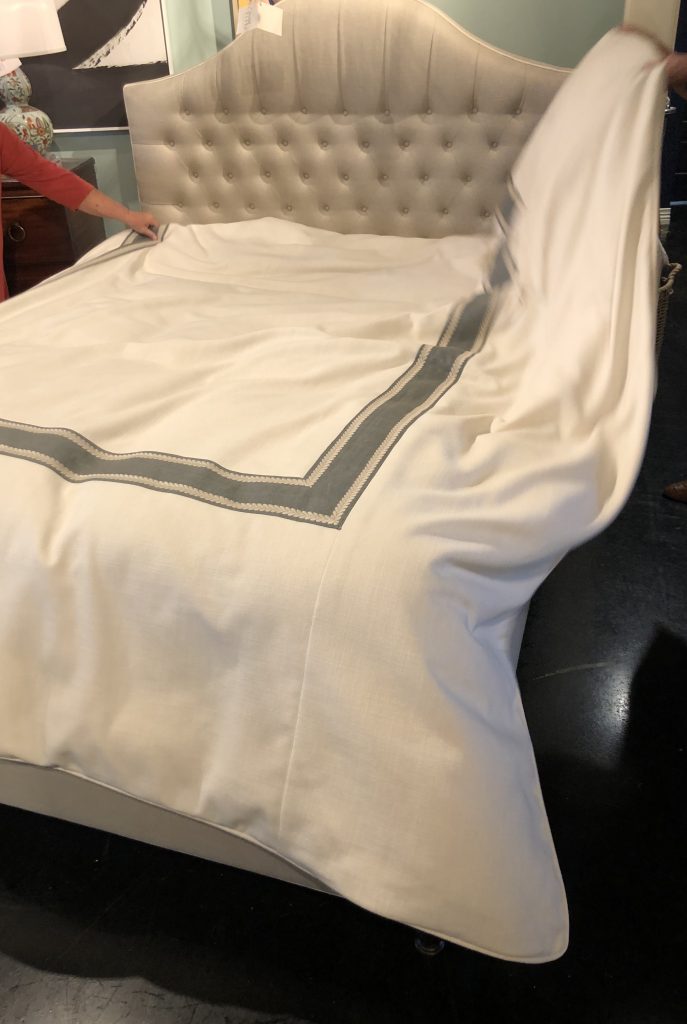 First, grab the corners of the fill and slide them in to the end corners of the duvet cover. Hold the corners in place while you slide the duvet down over the fill. Shake it out, then smooth it down. We sell fills in three weights, so be sure to pick the one that offers you the right amount of warmth. 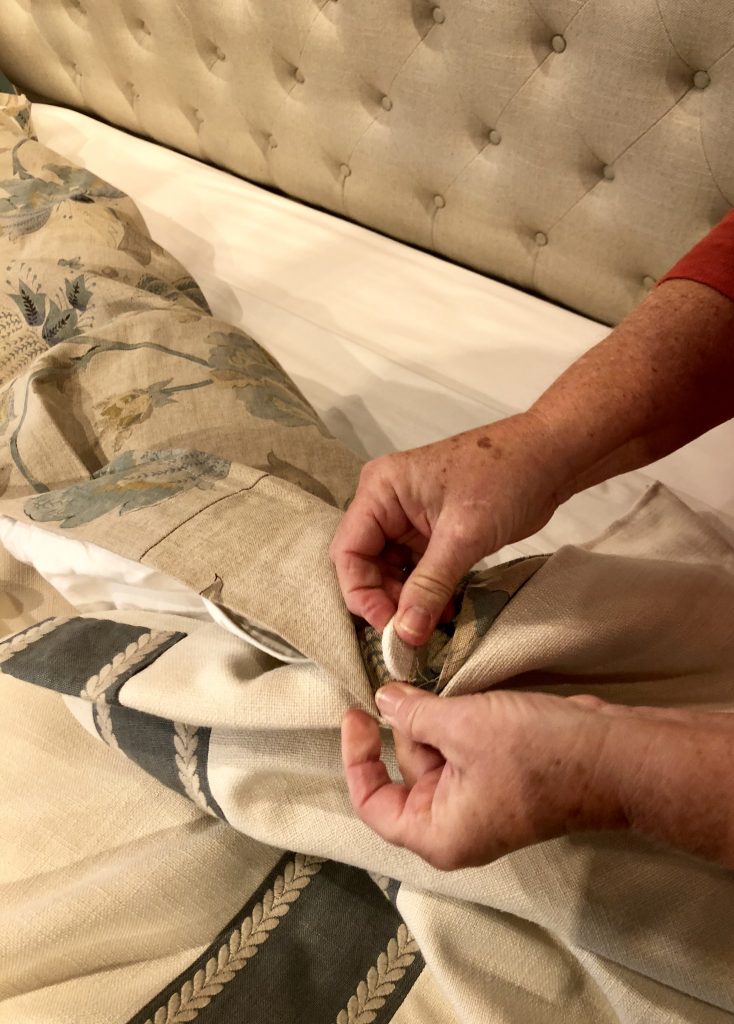 The custom duvets at Nell Hill’s usually have different fabric on each side so all you need to do is flip them over for a whole new look. Usually, we fold the duvet over the sheet and coverlet just a bit, so the buttons and contrasting fabric on the duvet’s back both show. 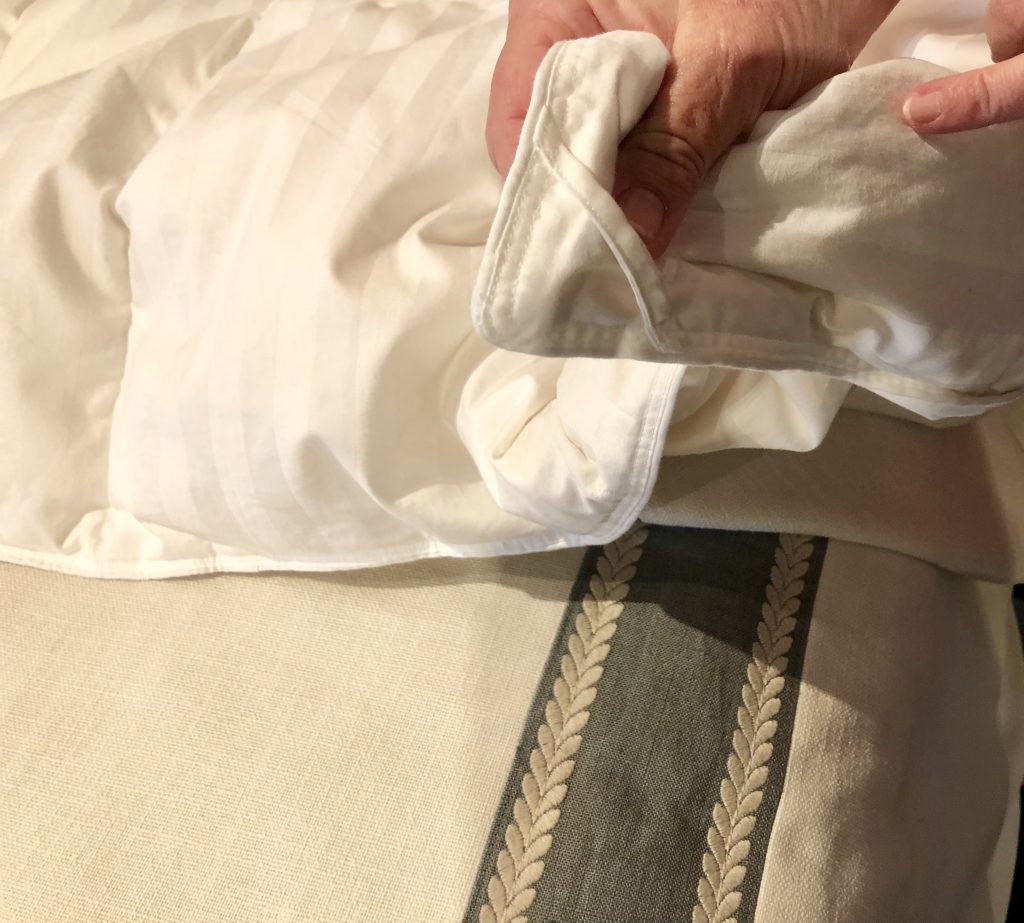 We are often asked how to keep the duvet fill from slipping out of the corners during daily use. The duvet fills we sell have a little ring sewn on the corners. So when we make custom duvets, we have the seamstress sew a little tie in the inside of the duvet corners. When we slide in the insert, we tie it in place. 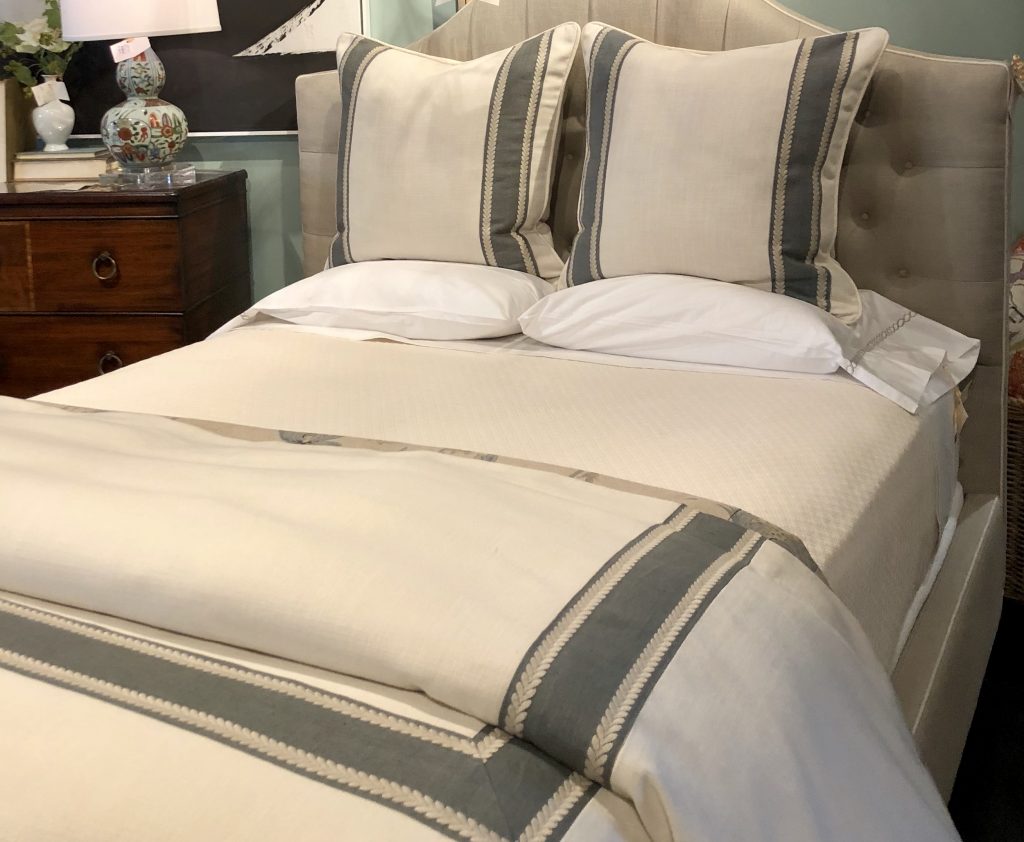 Our inspiration beds at Nell Hill’s, which are all queens, usually have seven decorative pillows. The back row features a set of 27 x 27 square pillows. If you have a king bed, we recommend you have three of these. We rest this back row of pillows on top of the sleeping pillow. 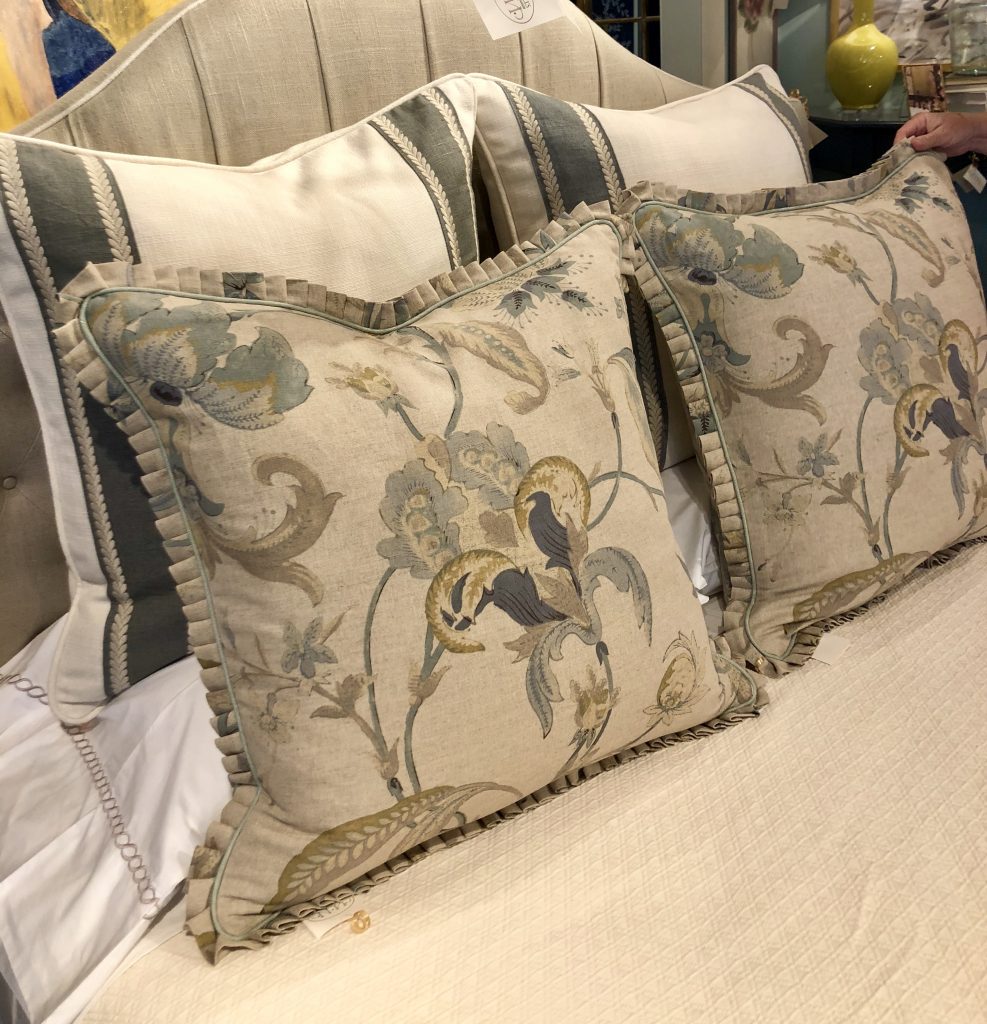 The accent pillows at Nell Hill’s all have a high-quality down fill. That makes them fluffy, yet dense enough to hold their shape. 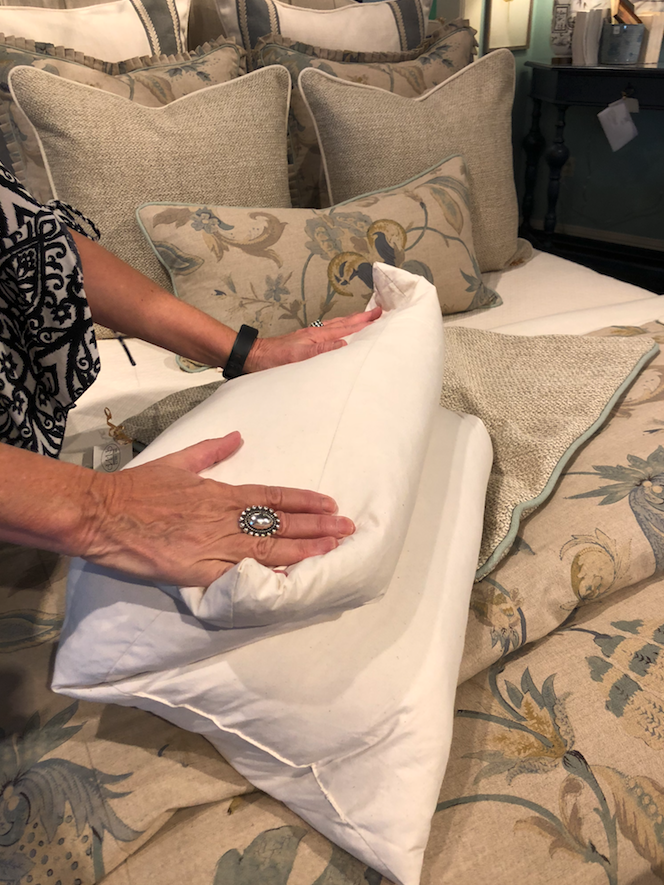 To get the fill into the pillow, Kathy and Paula give the fill a good chop to fold it in half, stick it in the sham, then unfold it inside the sham, making sure it extends to each corner. 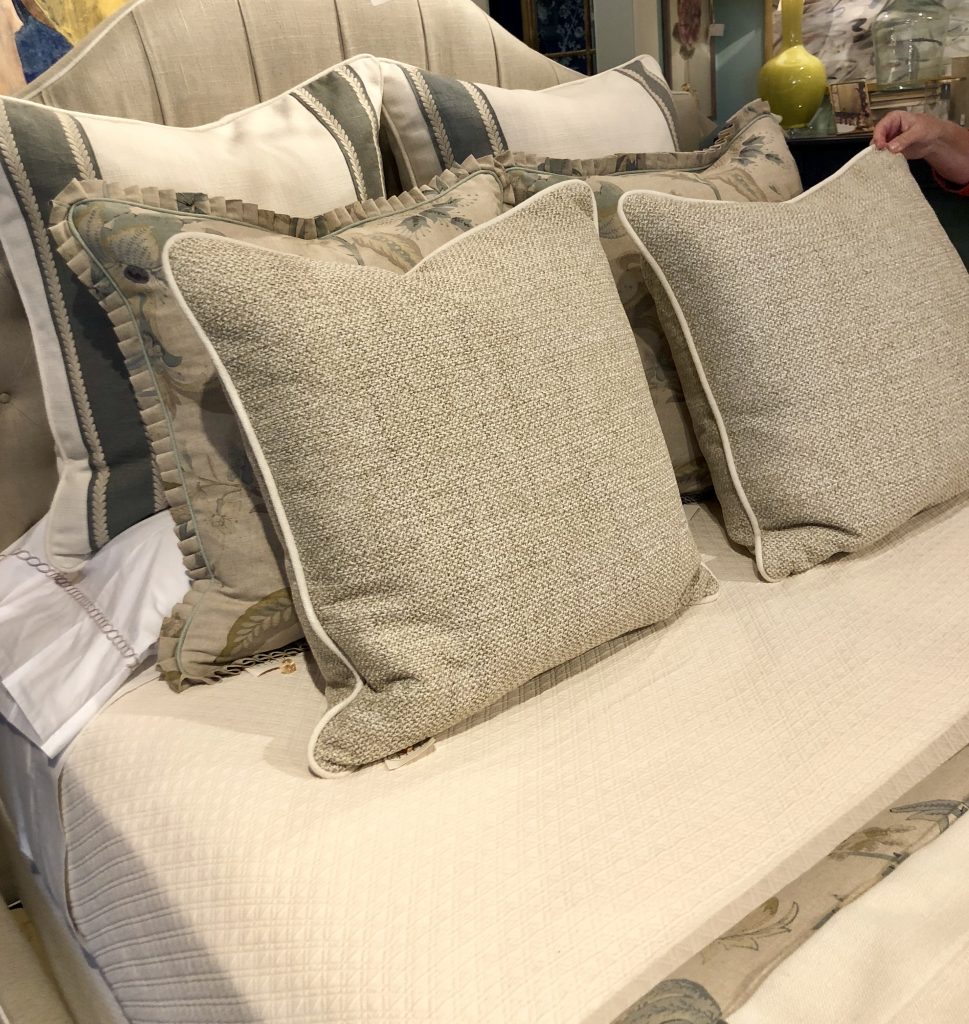 The second and third row of pillows on our inspiration beds are usually 24 x 24. 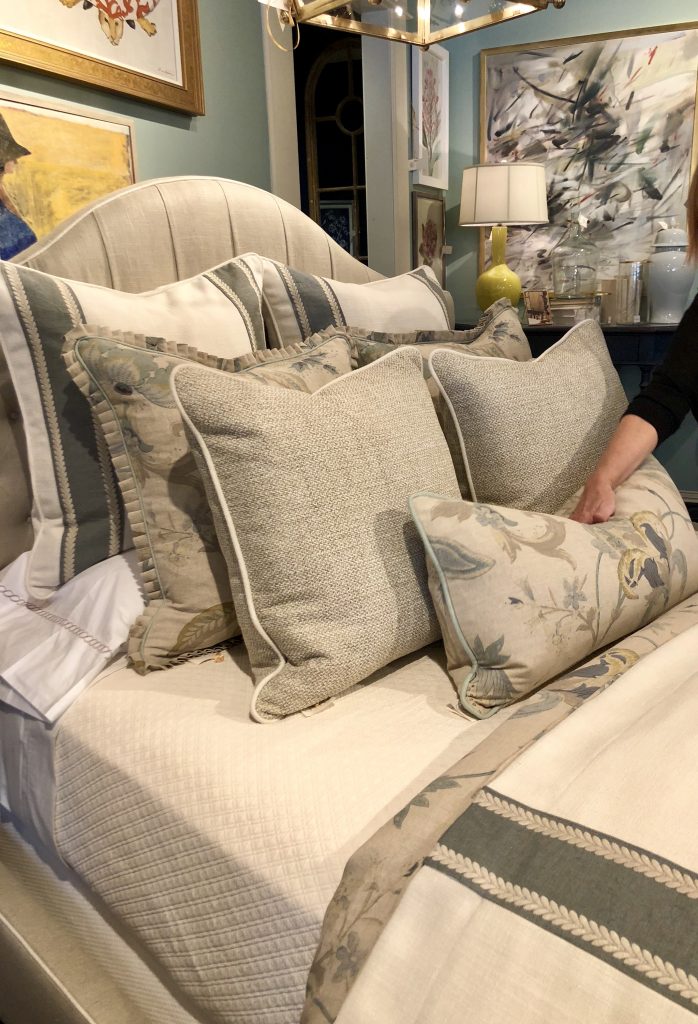 We like to finish with a focal point pillow. Sometimes it’s made of a zippy contrast fabric. Sometimes if features a monogram or great trim. For a queen bed, the smallest size we use is 16 x 30, and sometimes we go as large as a queen or king sham.

Modify to fit your style. 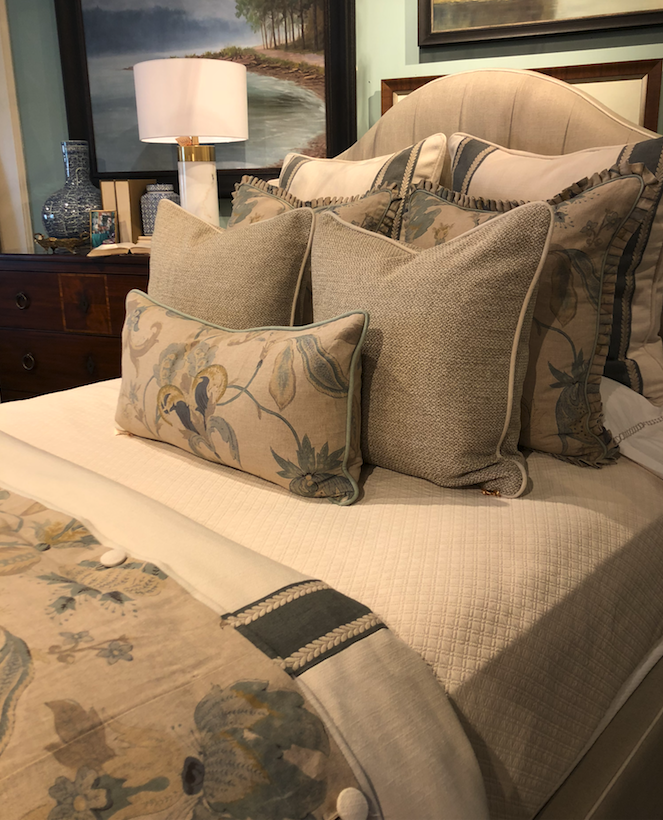 Stacks of pillows aren’t for everyone, so definitely tweak the look to fit your style. Use a bedspread instead of a duvet. (We carry the most beautiful long-drop chenille spreads right now, and they are flying out the door.) Add extra layers, folding a duvet or coverlet, or both, at the bottom of your bed.  Tailor the look to achieve your bedding bliss.