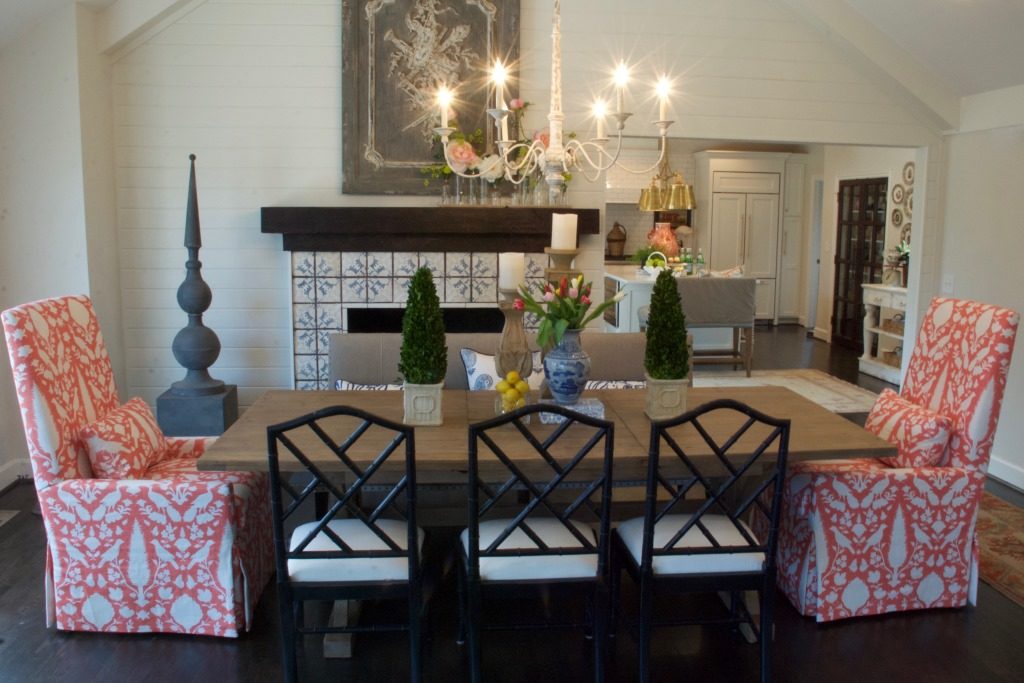 It started as a whim. My cousin Anne, who is a designer at Nell Hill’s, has three daughters who would soon be out of the nest.  Why not sell their larger family home and downsize into a fixer-upper she could renovate?

“It sounded so fun,” Anne remembers with an eye roll. “Looking at pictures and finding what you want is fun. But living through it isn’t as much fun,” she laughs, as she describes how their home sold lightning-fast, how their busy family of five had to move in with her sister-in-law for nine months, and how taking on the reno was a lot more work than she had anticipated. 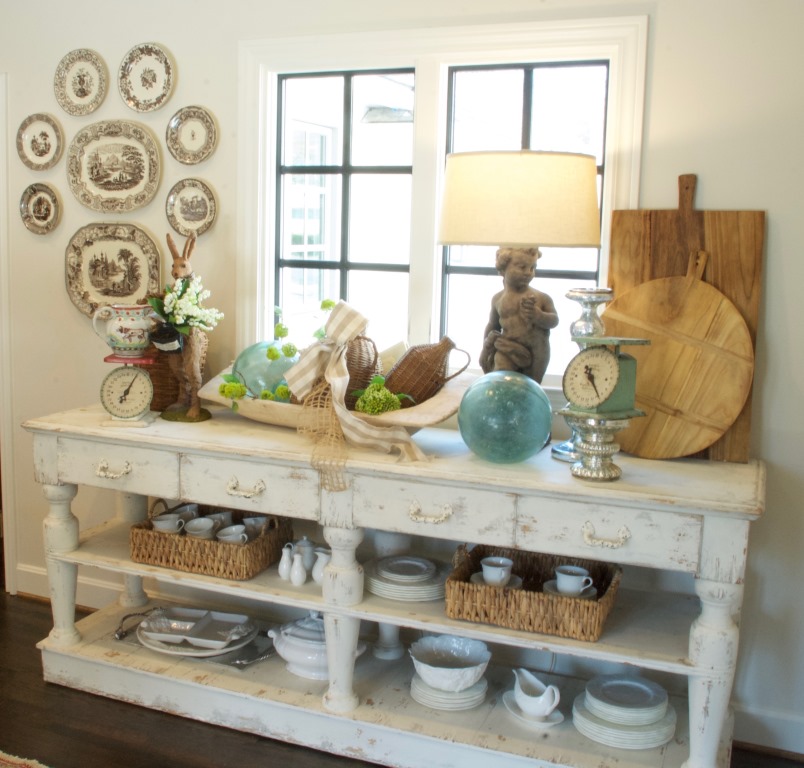 Now that she and Andy and the girls are settling into their new home, Anne knows she made the right call. This beautiful, bright, happy and inviting home fits their family to a T. We’ll share more of Anne’s reno magic as she finishes her spaces one by one. But today, I have to show you the kitchen and dining room. Here, she worked nothing short of a miracle! 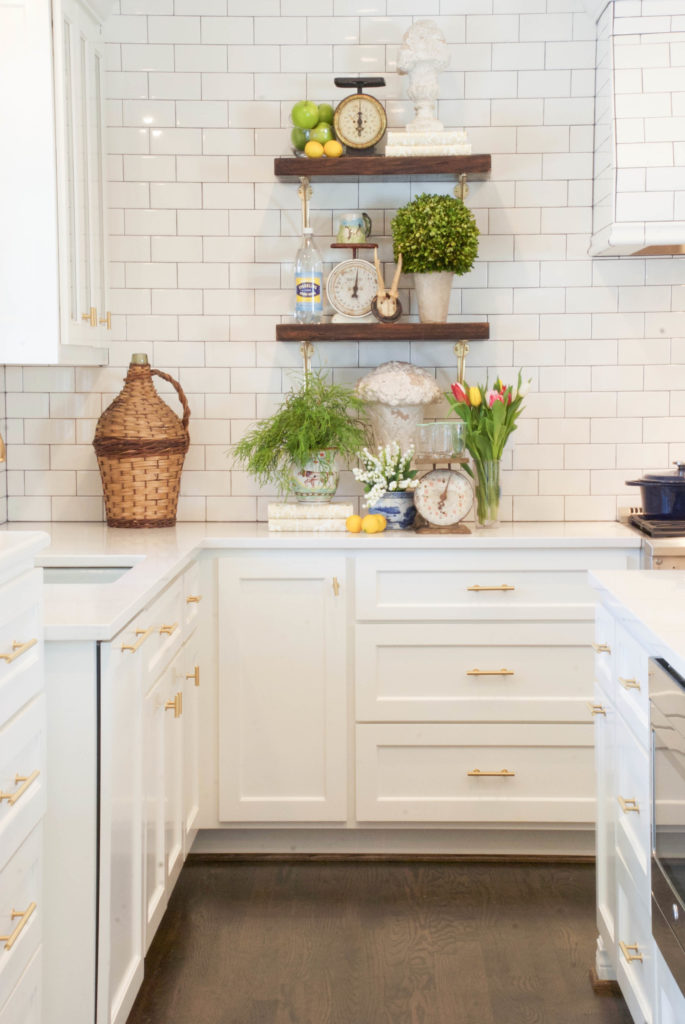 At the time they were looking for their “project” house, Anne had some friends who were also in the market. When she told them which house she bought, her friends thought she was crazy. “That house was AWFUL!” they said. 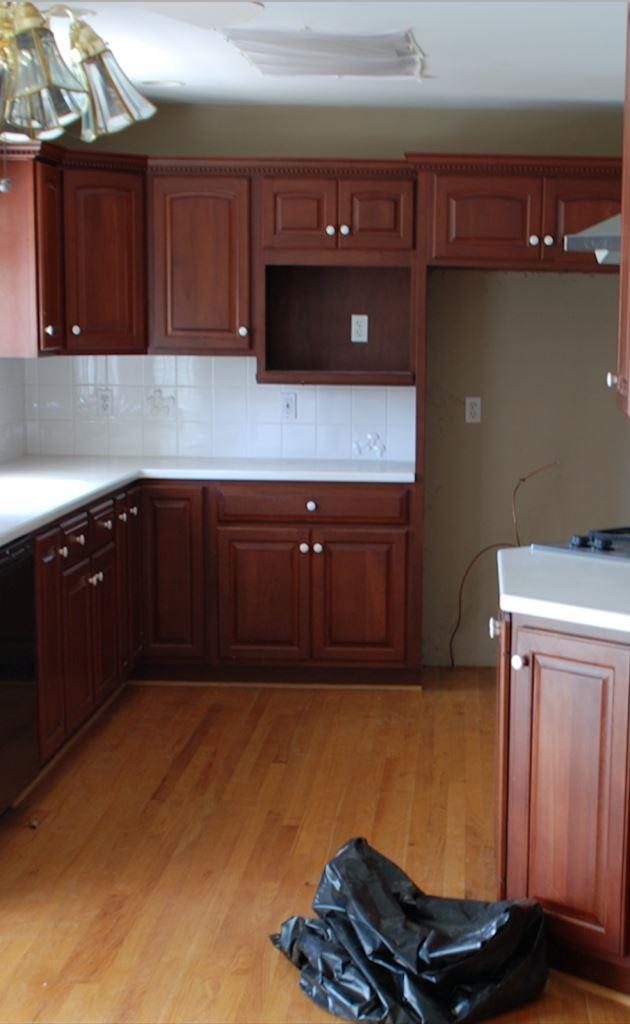 The floor plan of the existing kitchen, long and narrow and divided by a stairwell to the basement, was not going to work for this active family who was used to doing life around a big kitchen island. So they moved the stairwell, took out the dated cherry laminate cabinets and bumped up the ceiling by taking advantage of unused attic space. 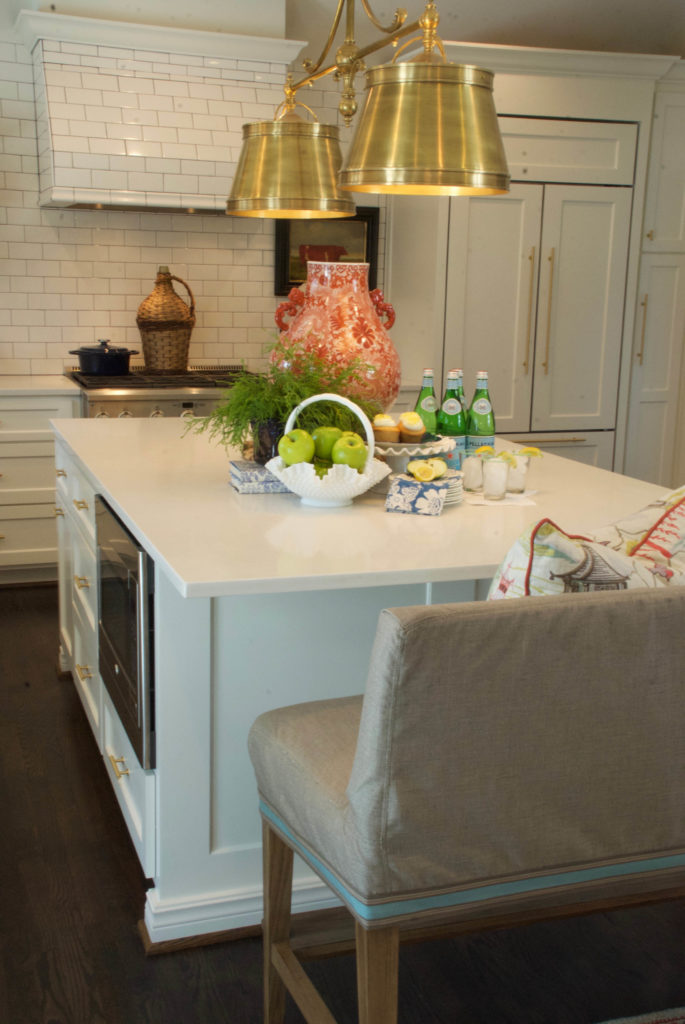 Anne knew she wanted a bright, white country kitchen. She covered the cabinets in a clean white paint and extended the subway tile up the wall around the range, pairing it with a charcoal grout so each tile would pop. Since the family spends a lot of time gathering around their kitchen island, Anne wanted to rim it with comfortable seating. She picked this great bench from Nell Hill’s and slip covered it in a Sunbrella fabric so spills were not a problem. If she ever gets tired of it, she can just replace the slip cover. 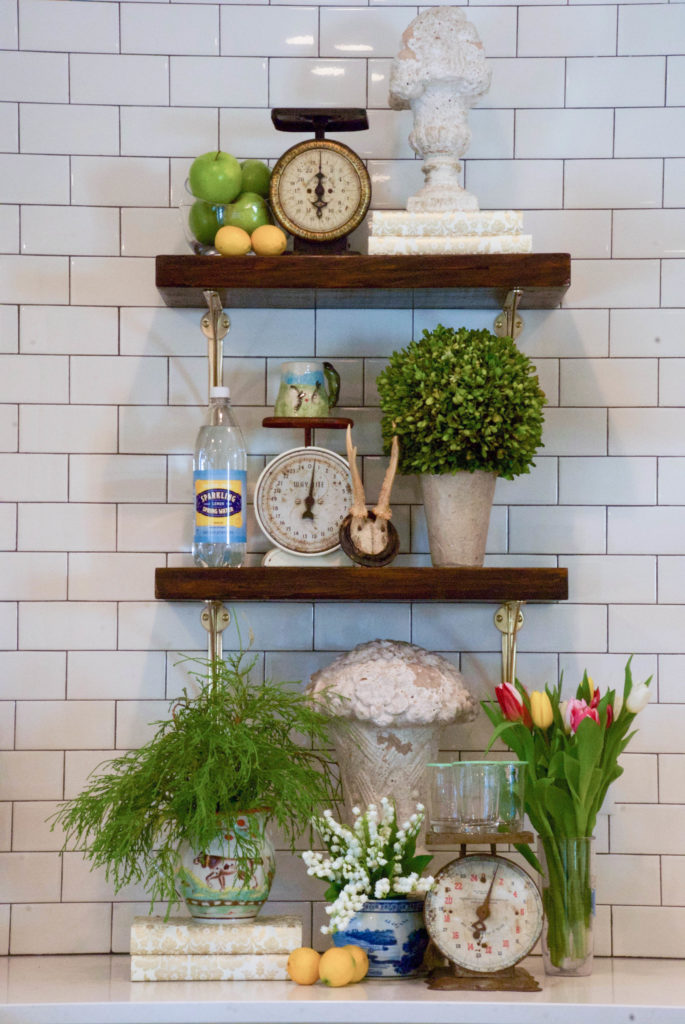 Anne’s contractor discovered some reclaimed wood that they turned into display shelves in the kitchen. Anne really likes warm metals, so she perched the rugged wood on gold brackets. You can see her design talents come to life in the display she created on the shelves, which will change with each season.

In addition to cabinets and cupboards, Anne likes to use free-standing furniture as storage in her kitchen. This large-scale buffet is the perfect place to store her china. Check out how Anne used baskets to collect small pieces like cups and saucers, and to weave in some texture. Anne says that it wasn’t until she added her accents, layer by layer, that the new house began to feel like home. “Even when you work at Nell Hill’s, it takes time,” she laughs. “You can’t do it overnight.” 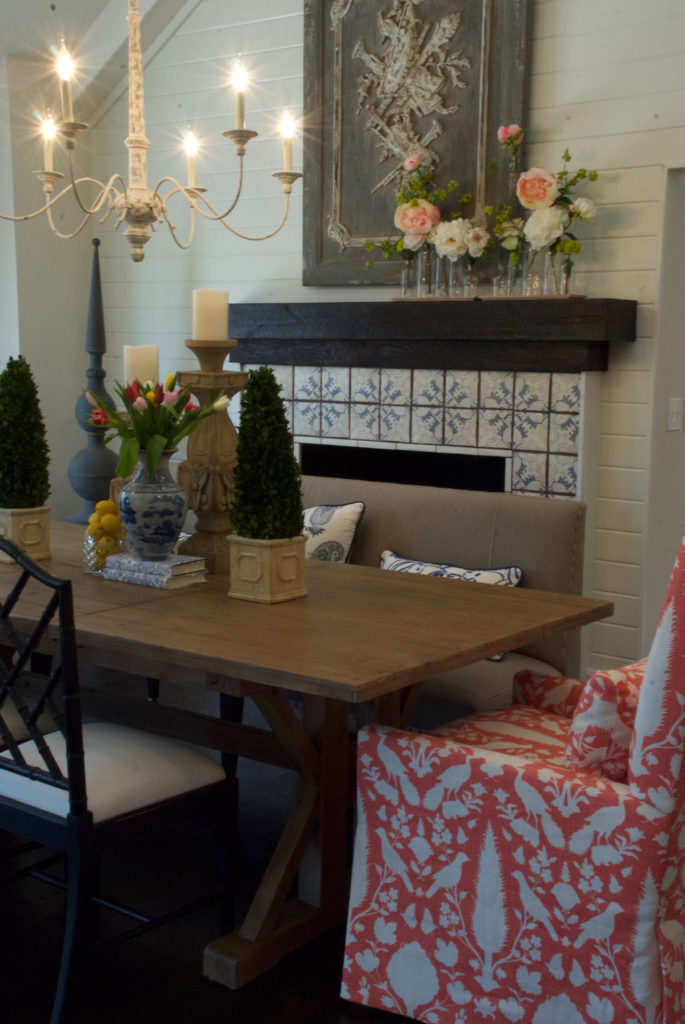 The large room that flowed from the kitchen was supposed to be a living room, Anne guesses. But for her, it made the perfect spot for a large, casual family dining room. She started with a pine farm table, then rimmed it with a mix of seating options: Two upholstered winged back chairs covered in a coral fabric she adores. A set of bamboo backed chairs. And, a bench covered in a ticking fabric, which allows them to squeeze in extra kids. 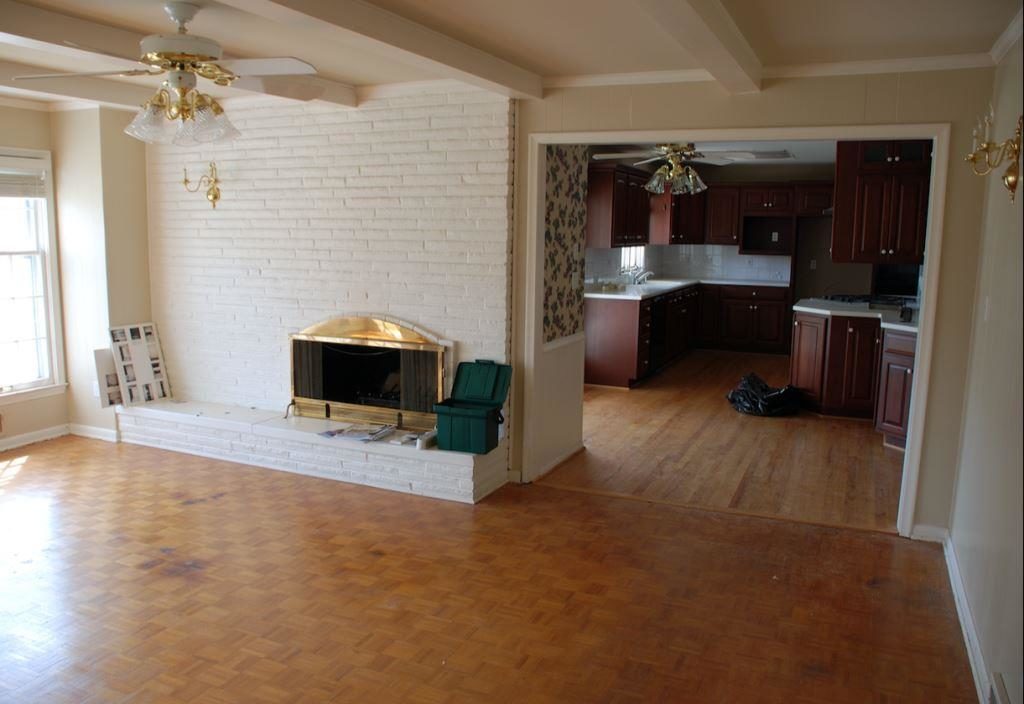 This is what Anne was faced with when imagining what the dining room could be. A small, awkwardly situated fireplace. Strangely placed lighting. Low ceilings. A floor that had seen better days.

To open up the room and give it more light and life, they bumped up the ceiling into unused attic space above, covered the wall in shiplap, accentuated the fireplace with hand-painted tiles, and used a piece of reclaimed wood as the mantel. Anne is a master at making any space feel warm and inviting. I love the centerpiece on her dining room table, touches of blue that echo the tile in the fireplace. My next question for Anne is, “When can I move in?”

Next Week … Come join me at Innisfree for a garden breakfast set for a princess … my granddaughter!