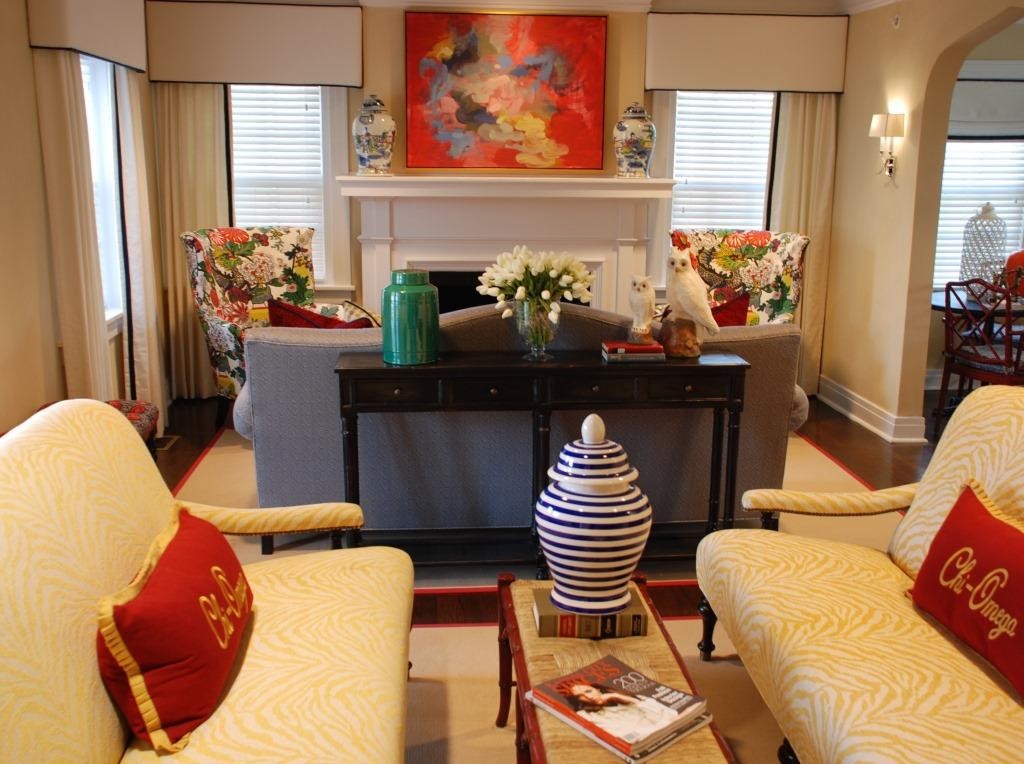 Oh to be a college student again! My mother will tell you that while I was in college, I majored in Boys. She may be right. If I had it to do over again, I might not change my “major”, but I would definitely want to live in one of the three sorority chapter houses the Nell Hill’s team just redesigned: Chi Omega, Delta Delta Delta and Kappa Delta. The houses are now so fresh, fun and full of energy, they will make you feel 18 again. Come take a peek! 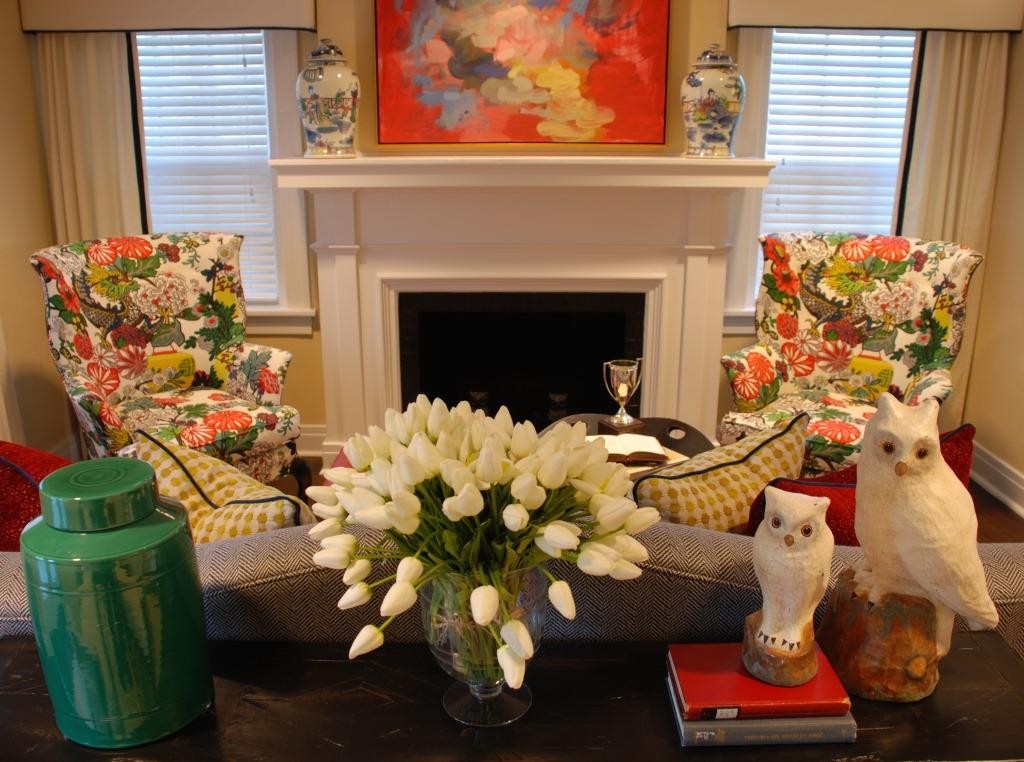 Diane Tomlinson, one of our designers at Nell Hill’s, does an amazing job of making a house feel like home, even when the house is packed full of dozens of busy college women. A very active Pi Beta Phi alumna, Diane was approached by her chapter at the University of Kansas to makeover a few common areas in the chapter house. She worked her magic, and word started to spread about her ability to create designs that honor the chapter’s traditions, while re-envisioning the living spaces to reflect the energetic personalities of today’s young members. 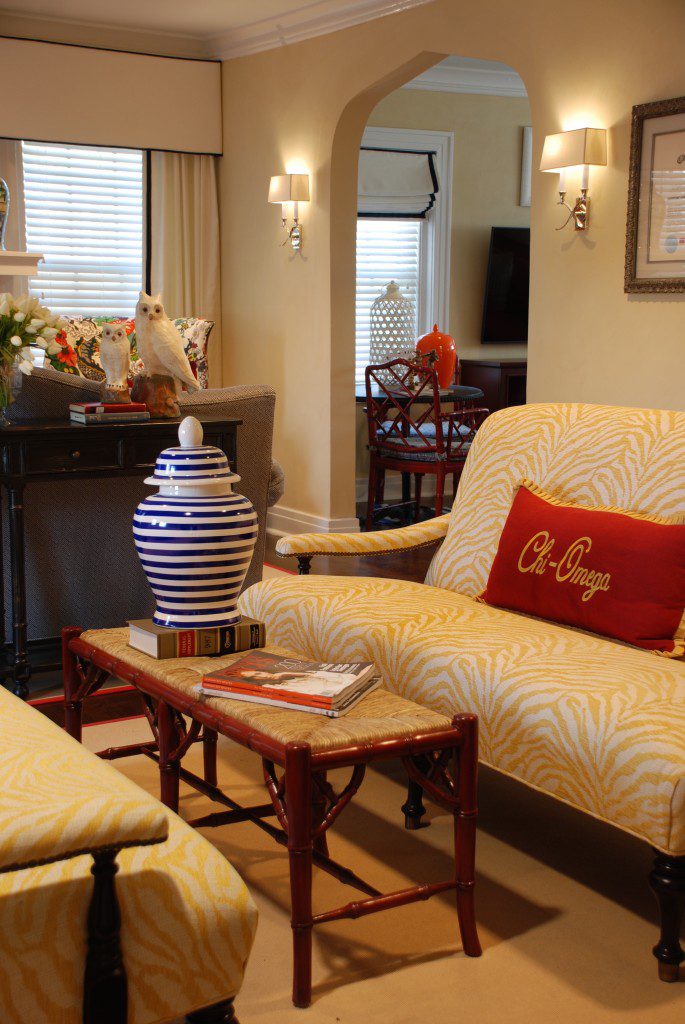 The Chi Omega chapter house at the University of Missouri – Kansas City is a great example.  The sorority bought a building the university had used as office space, gutted it and started from the ground up to remake it into a beautiful home for 30 women. 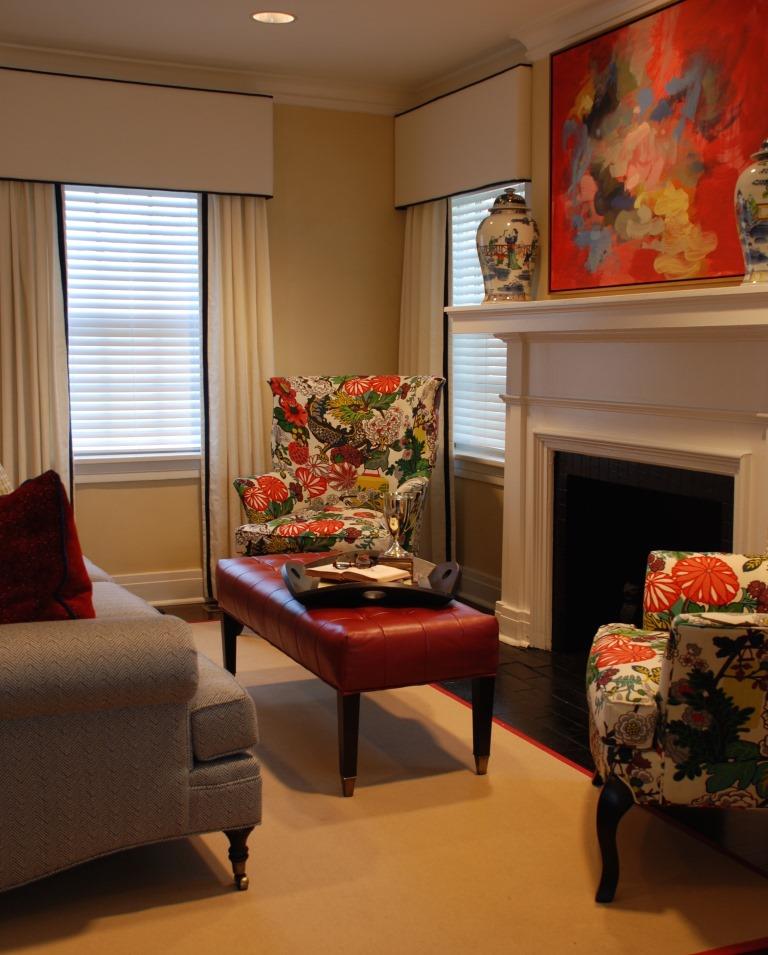 The women of Chi Omega wanted a decorating scheme that gave their sorority’s colors, cardinal and straw, a younger, more adventurous look. Diane used this big, bold abstract painting as the muse for the house’s living room, then teased out accent colors to pop in through pillows and accessories. A bright and bold Chiang Mai fabric featuring primary colors kept the momentum going throughout the room, and gave her additional colors to pull in through accents, like pottery and pillows. 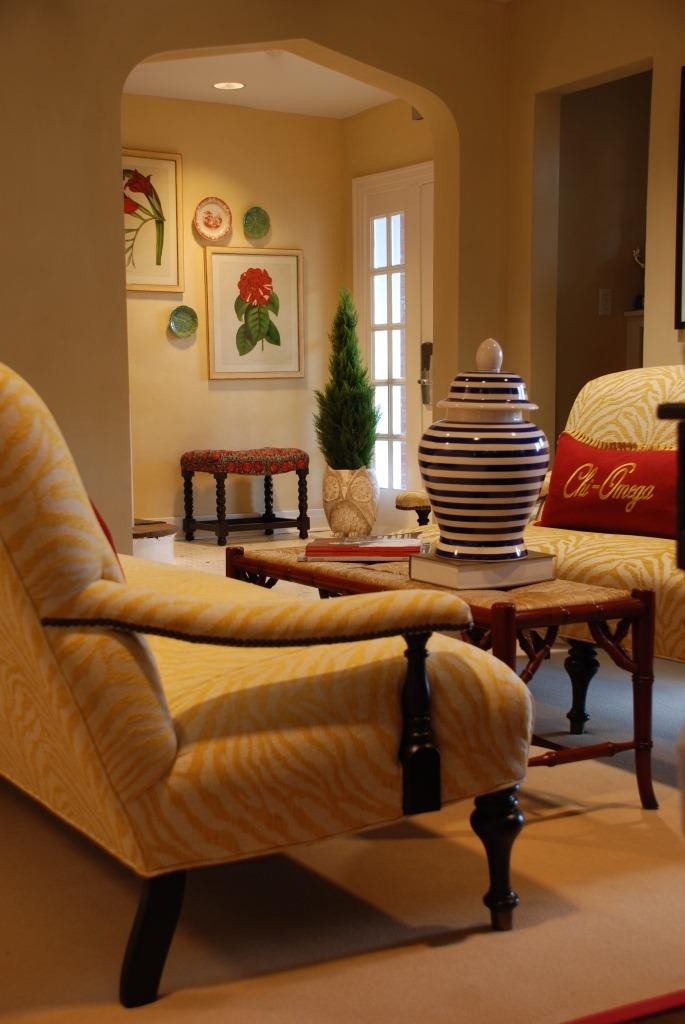 Too often in communal living spaces, the rooms feel a bit sterile and unfinished because the walls aren’t covered in artwork. Diane fixed that by adding artwork montages that mixed up old and new, like these botanical prints and plates. A key to making large rooms feel less cavernous, and more intimate, is to carve them into smaller conversation areas, like Diane did here. Now, the girls cluster into the rooms-within-a room, studying or talking with friends.

As is often the case with older buildings, the windows in the main living room were not perfectly symmetrical, so Diane used a great trick to make them appear to match: she did one drape on each side of the window to add balance. 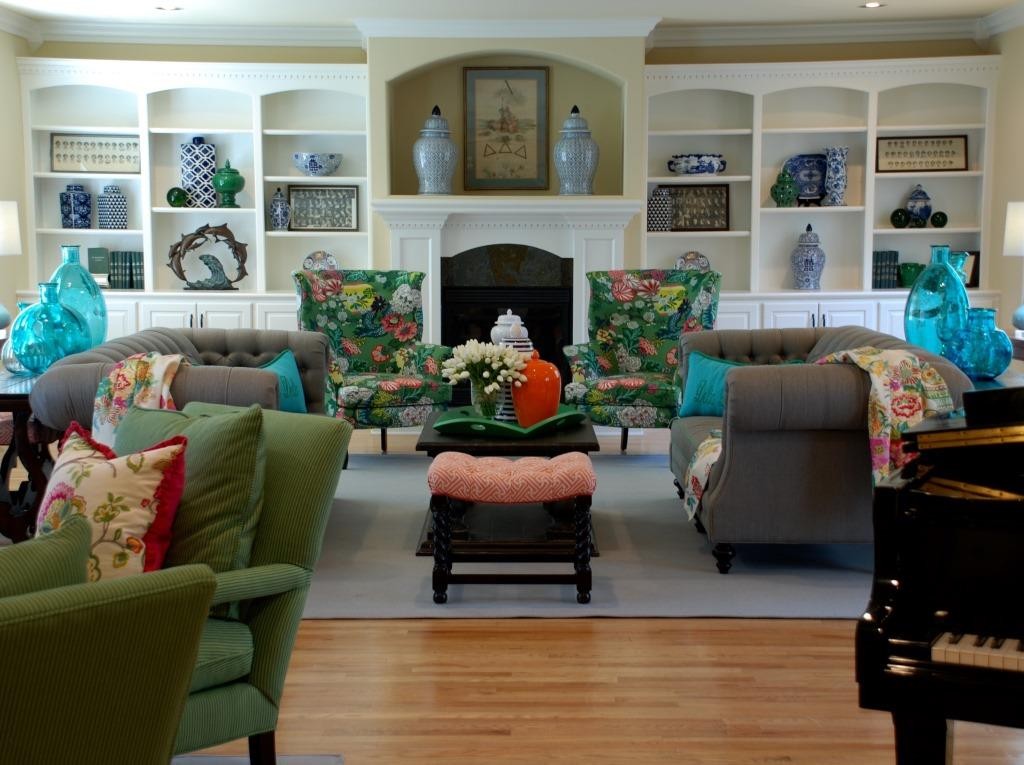 Many sorority houses were decorated several decades ago and used lots of dark colors and industrial grade fabrics, Diane says. So one of her goals when she redecorates them is to lighten and brighten the spaces so they reflect the vibrancy of the young women who live there. In the Delta Delta Delta house at Baker University, she painted the walls in the large living room a creamy yellow to make it feel warm and cozy. To call attention to the striking wall of bookcases, she filled the shelves with a great mix of accents, like inexpensive pottery, that looks clean and contemporary. 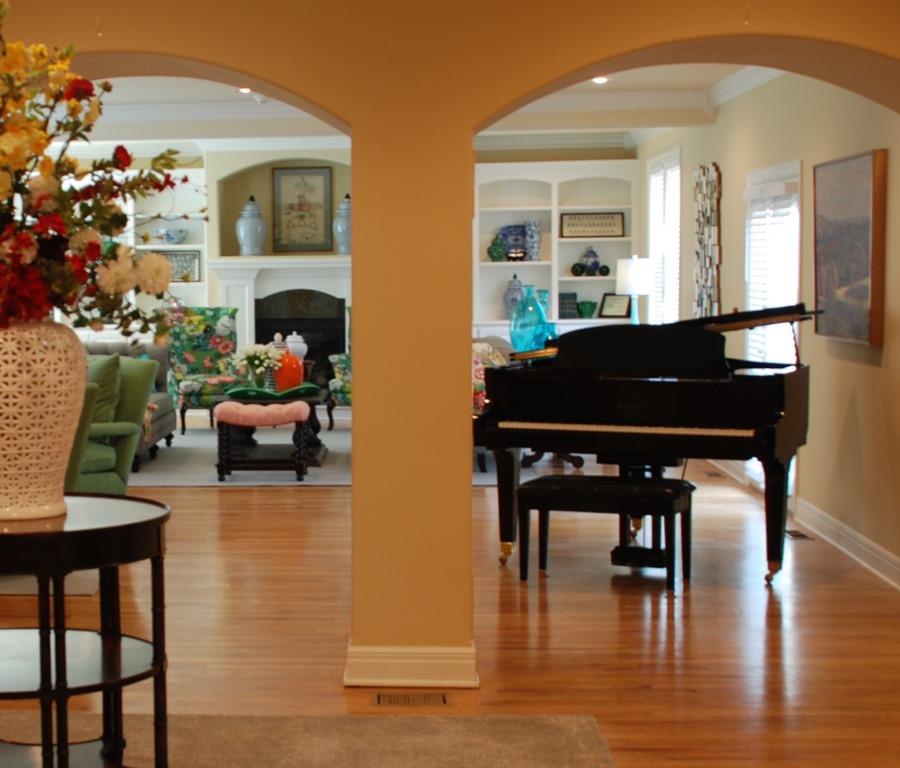 Because the chapters use their main living rooms for so many different activities, from new member recruitment to formal parties to study groups, the furnishings in the space need to be flexible, Diane points out.  She always designs these rooms so the furniture can be moved into different configurations. Her secret is to use a mix of fabrics that are different enough to be interesting, yet similar enough so they all work together cohesively. Repetition of color and pattern is the key to success. 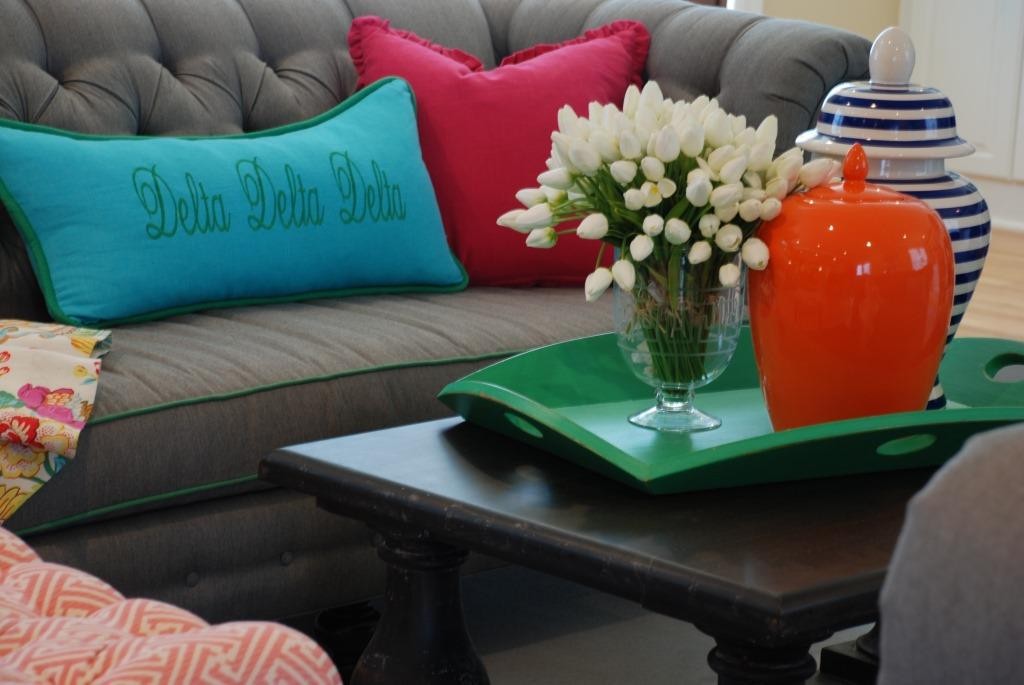 The chapter women told Diane they loved turquoise. So her “anchor fabric” — the fabric that set the look for the room – was a jade Chiang Mai, which features peach, jade and turquoise. It’s a bold fabric and you don’t need a lot of it in a room, so Diane used it to cover the wingback chairs that flanked the fireplace. The sofas, in contrast, are covered in a nice neutral gray to balance out all that pattern and color. 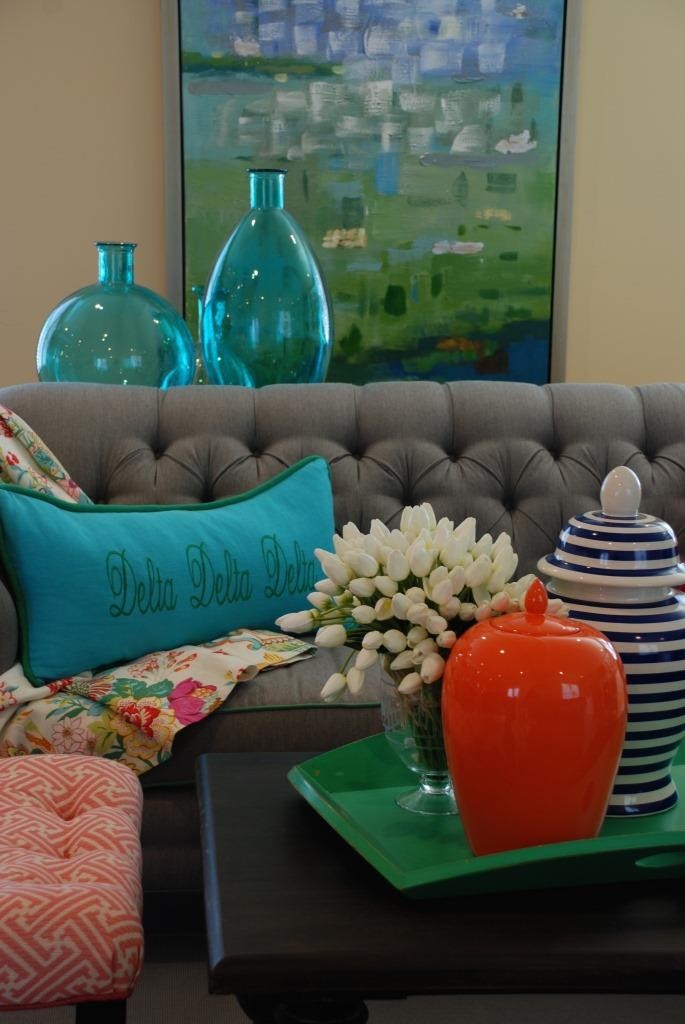 Diane pulled in turquoise and other playful colors through inexpensive but dramatic accents, like vases and trays. Behind each sofa is a console table, with upholstered benches tucked in underneath to use for extra seating. Diane often uses contemporary paintings in her sorority house makeovers, but then mixes in the chapter’s treasures, like historic photos of the house or its earliest members, or collected pieces like silver trays. “It’s important for the girls to see that they are part of a long line of women,” Diane explains. 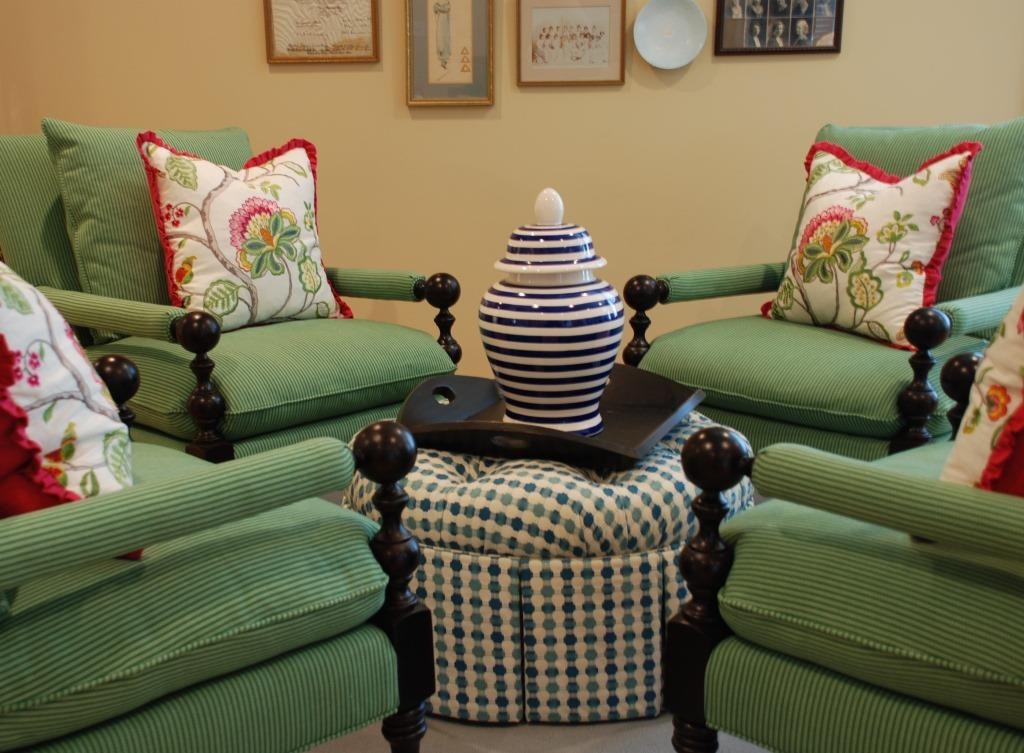 One conversation group was created out of four comfy chairs, revolving around an upholstered ottoman. The ottoman can be used several different ways – as a desk, a dining spot, a footrest or an extra seat, to name a few. 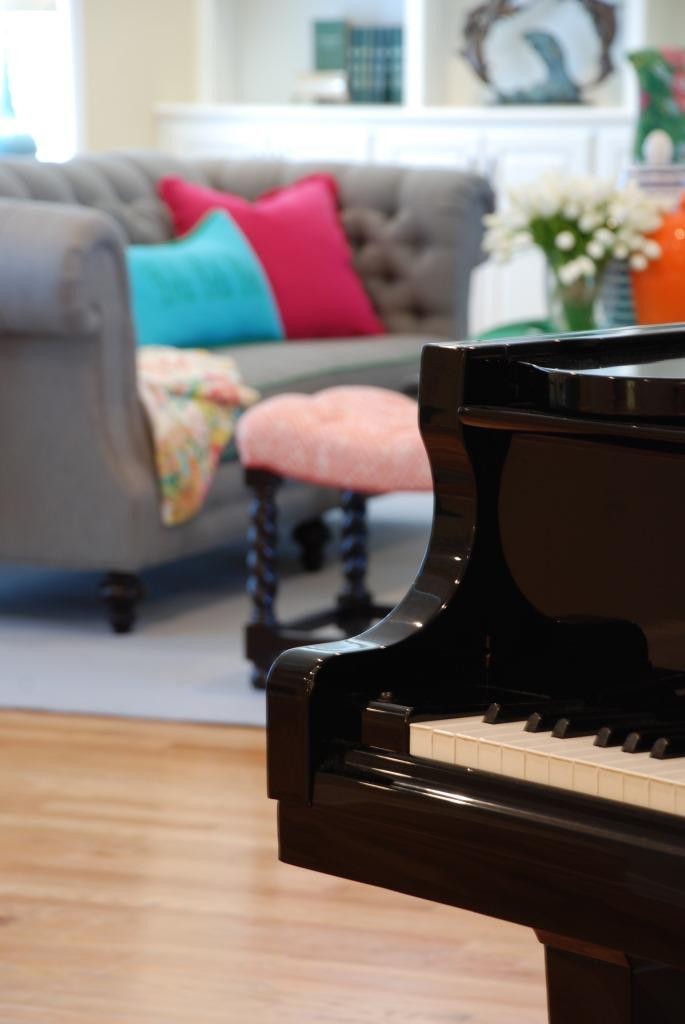 Most sorority houses have magnificent grand pianos. In this house, the piano fills in an empty corner in the living room and is balanced by a grouping of furniture in the opposite corner.

Kappa Delta, the University of Kansas 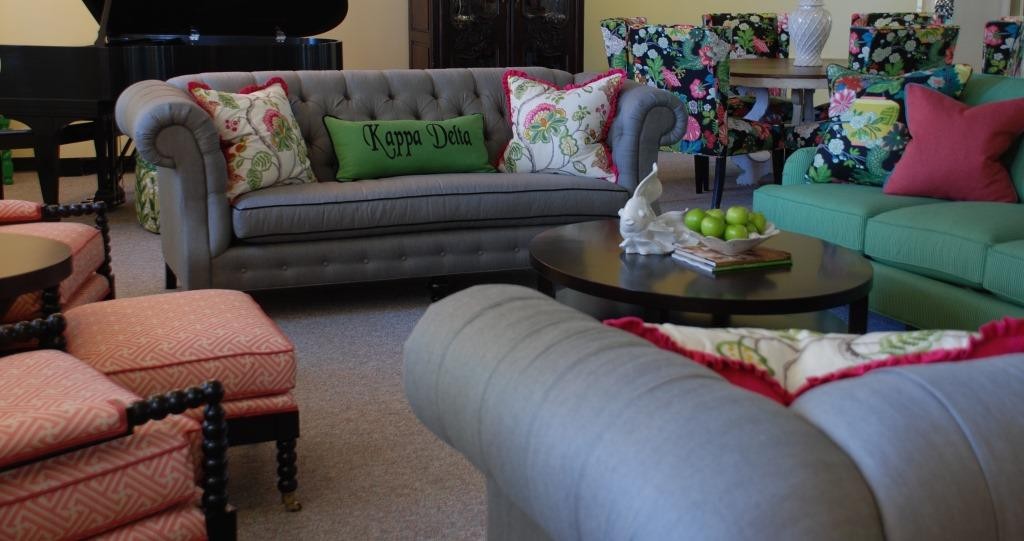 One of the coolest things that happens when Diane redecorates a chapter houses is that instead of retreating to their rooms, the girls start to hang out together in the common spaces, because the rooms are now so beautiful and inviting. 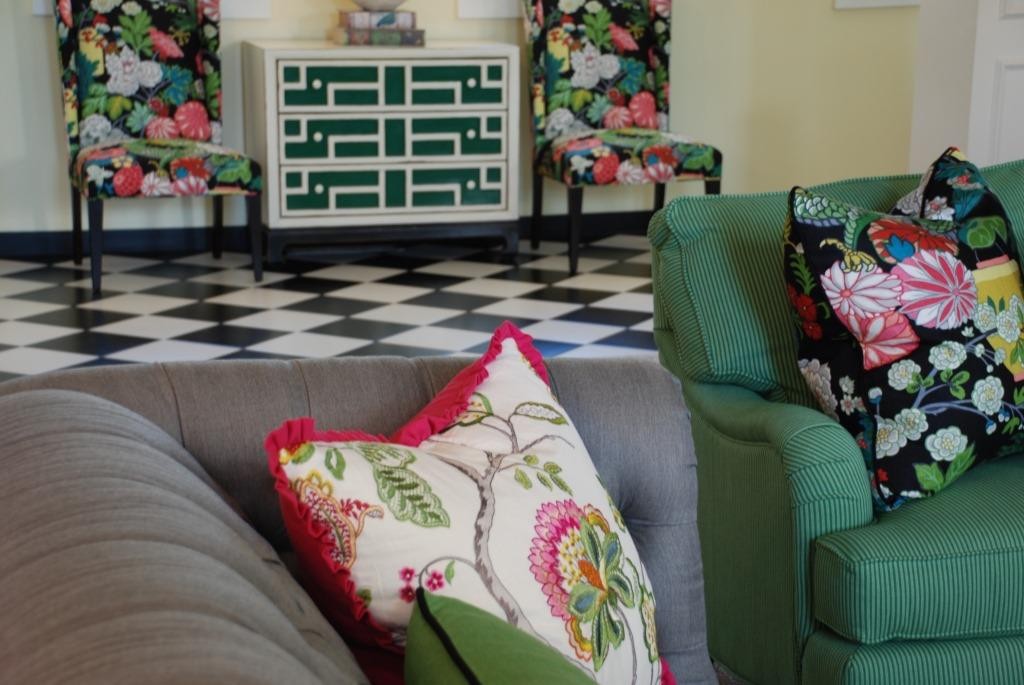 Throughout her design for this lovely home, Diane wove in the sorority’s colors of green and cream, then punched them up with some other brilliant hues the college women loved. Chiang Mai onyx was the inspiration fabric for the large living room. 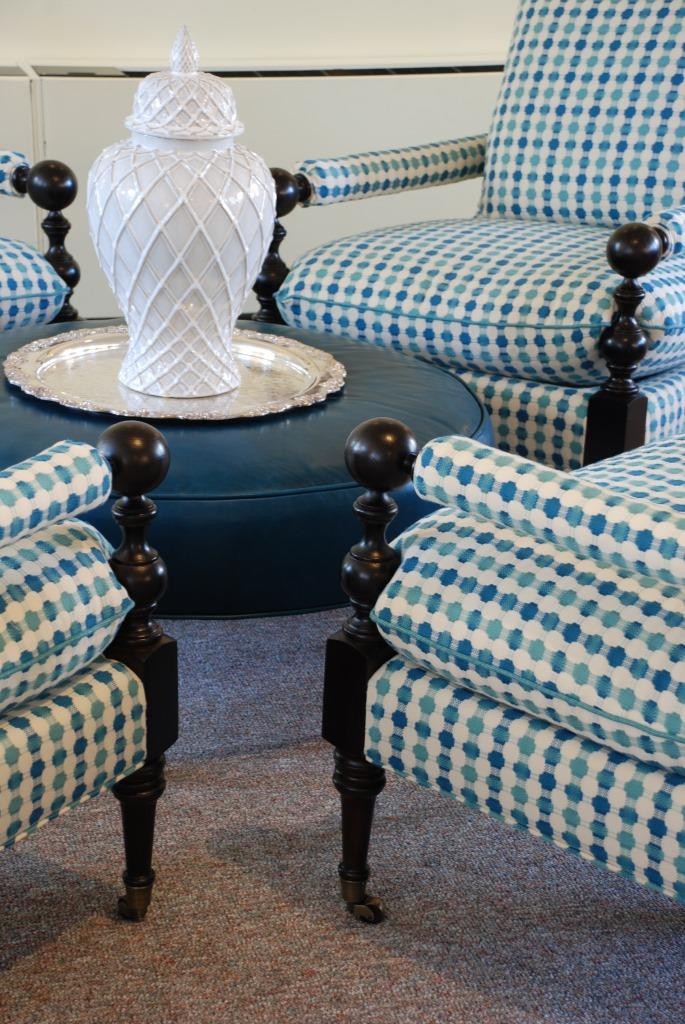 One of the vignettes in this large room is a conference table surrounded by chairs upholstered in the Asian-influenced anchor fabric, the perfect spot to study or entertain. Another is this set of four chairs surrounding a blue leather ottoman. 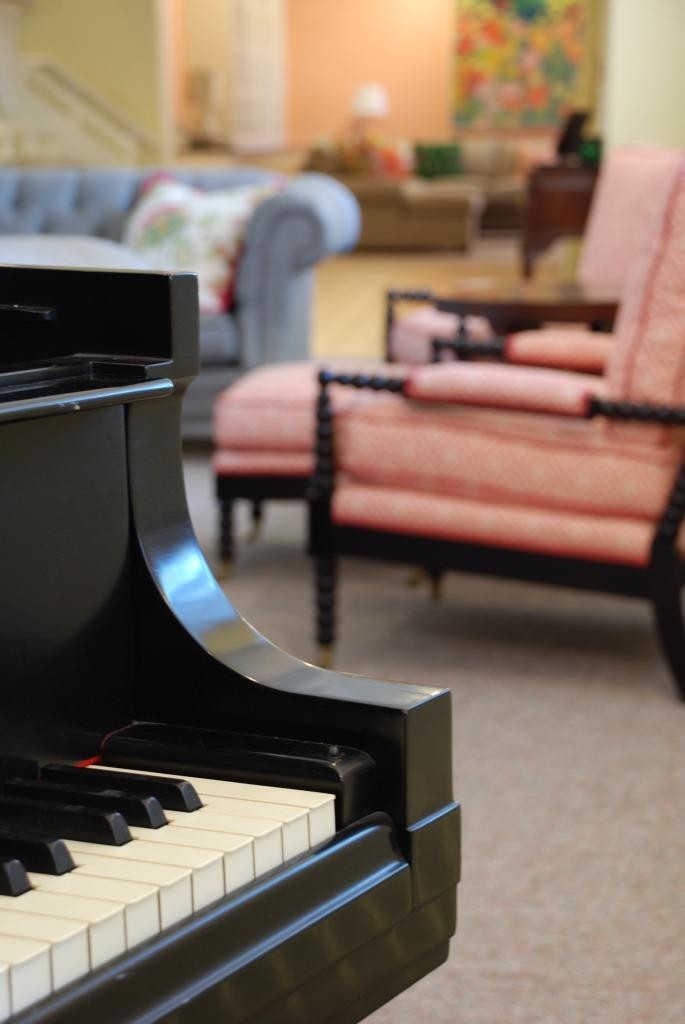 Opposite of the house’s formal living room, on the other side of the entry, is the TV room where the chapter women hang out. 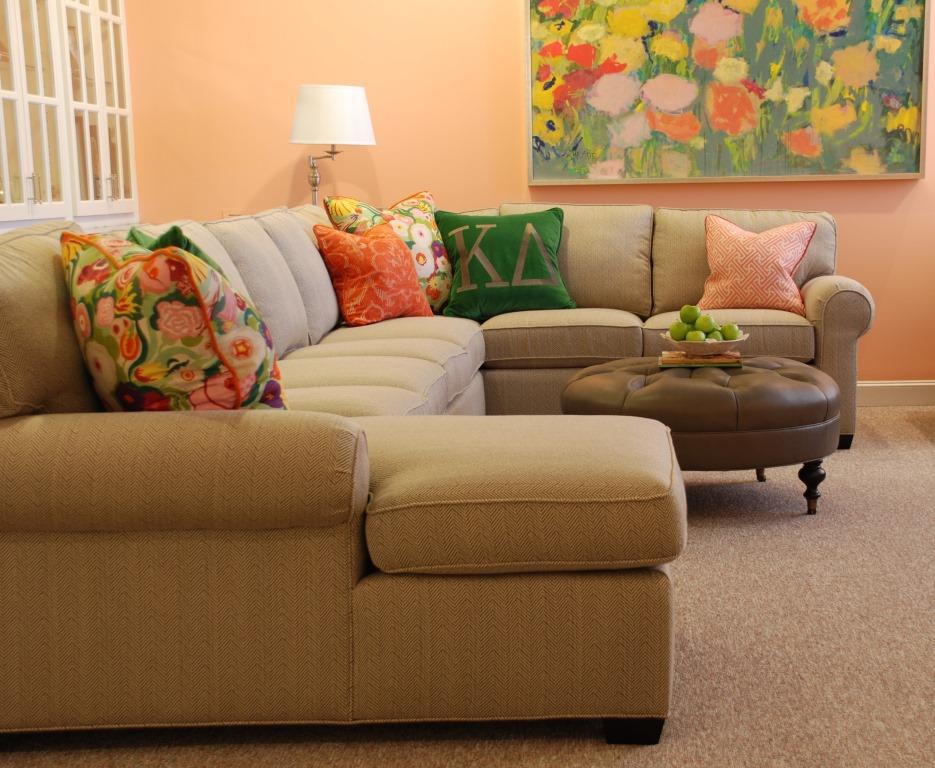 The alumnae board wanted this room to be filled with sectional sofas in order to seat as many people as possible. So Diane did a custom sofa that included lots of sections and had it upholstered in a Sunbrella fabric that is so durable, it could withstand spilled popcorn without flinching. Indoor Sunbrella and high-durability fabrics are so beautiful now, that Diane uses them in all the chapter houses she designs. The result? Spaces the girls can’t resist!

Next Week …It can be hard to pick a paint color. So I’ll share a few of my all-time-favorite colors.

« Welcome to Innisfree, My Cottage by the Lake, for October Fun
My 12 No-Fail Colors for Your Home »